Himachal Pradesh is known as the capital for paragliding where you can experience the same with any of your favorite best Himachal Pradesh Holiday Package during the months from March to June that is the summer season or from the months of September to November.

Paragliding is basically the jumping from a height of 3500 m above the ground level with the support of the bungee cords that allows the adventurer to float in the air and enjoy the thrilling and unique experience. The best spots for paragliding include, Bir Billing in Kangra Valley and Solang Nala in Manali are regarded as the best followed by other enjoyable and accessible paragliding spots namely, Rohtang Pass near Manali, Kothi below Rohtang Pass, Bijli Mahadev near Kullu, Bandla Ridge in Bilaspur. This is a worth experiencing adventure that you can count on as a beginner with navigators who train you with the same amidst the lovely breeze playing a huge role in the paragliding process with the peaks as the backdrop of the process. 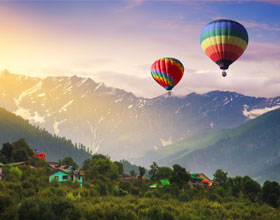