With more than 10 million people, and seven classified geographic regions namely, Scandinavia, the British Isles, Western Europe, Southern Europe, Central Europe, South-Eastern Europe, and Eastern Europe. It is the 6th largest continent which tends to flatter its visitors with its sheer beauty and diversity. Make your way to Europe through the exclusive Europe tour package put forward by Swan Tours.

Before jumping onto any other fact, you must be acquainted with the significance of the term "Eastern Europe" which is used to refer to all the countries of Europe which were once ruled by the communist regimes known as the Eastern Bloc. There are innumerable countries that Eastern Europe comprises of namely, Bulgaria, Hungary, Czech Republic, Moldova, Ukraine, Belarus, Russian Federation, Romania, Slovakia, and Poland in Eastern Europe with others like Serbia, Croatia, Bosnia, Albania and Montenegro, and other Baltic countries aligning. If you are eager to hunt the several places or destinations of East Europe, then you can draw the exciting Eastern Europe Tour Packages put forward to you by Swan Tours provided exclusively for you at budget and interest which suits your convenience.

The Major Highlights of Eastern Europe

There are multiple platforms that offer Tour to Eastern Europe, but Swan Tours stands apart from all others in multifarious manners. On this significant Eastern European tour packages from India, there is a list of exclusive activities that the places boast of, without any room for disappointment. Our Eastern Europe packages from India make certain that you return home with excellent memories of quality time spent and experiences worth valuing. Swan Tours gives you complete tour packages to Eastern Europe at an economical price that never daunts your pocket. Commencing from the booking of travel tickets to accommodation, from pick-ups and drop-ins, Swan Tours seek to get you covered for every possible thing that may click your concern.

Eastern Europe is known for

Which is the Best Time to visit Eastern Europe?

The most suitable season to plan a trip to Eastern Europe is the Shoulder Season or the Spring Season that includes the months of, March, April and May and the autumn season that include the months of September, October and November. The weather conditions at Eastern Europe is basically considered as cool-summer humid continental spread across. Xmas markets as well as warm spiced red wine offered out of large cauldrons, however, it's likewise when everyone has actually gone residence with their family members. Most of the tourists have witnessed the shoulder season as the best times to visit the place for it has fewer crowds, leaving the roads clear to check out.

Which are the best places to eat in Eastern Europe?

Food is one of the most essential components that decide your vacation to a new place, for a happy stomach makes way for a happy journey. The cuisines of Eastern Europe are an essential mark on its culture which includes multifarious dishes that have been enlisted below. The rates of the food available are not extremely expensive for which one can make random moves for Lunch (Euro 5 -8 Per Head) and also motivate individuals to Consume.

Warsaw, Poland - The food here is reasonable, simple and gives satisfaction to the stomach. The staple dish here is the bigos (hunter's stew) and the National dish which is a must-have, pierogi. Apart from these there are zurek, golabki, makowiec and so on.

Belgrade, Serbia - Serbian food is full of taste and flavours! Ajvar is the staple food of Serbia followed by other dishes like karadjordjeva snicla, Sarma and others alike.

Vilnius, Lithuania - Lithuanian dishes hold their base in potatoes, meat and dairy. Starting with the national dish- cepelinai, the others include Borscht, and blynai that you cannot miss.

Sofia, Bulgaria - Fresh quality, full of veggies and dairy delights combine to form Bulgarian delicacies. Banitsa in breakfast, a bottle of ‘boza, shopska salata as a salad addition and shkembe chorba which is a soup fills your platter.

Bucharest, Romania - If you are a fan of comfort food, then Romania is the most ideal choice. The fusion of many items result in Romania food like sarmale, Mamaliga, and papanasi.

Tips for Traveling to Eastern Europe 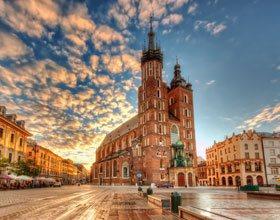 Eastern Europe is a lovely tourist destination marked with a rich and remarkable history. For tourists seeking to get off the beaten course, Eastern Europe bears the added advantages of being a lot less jampacked and a lot of budget-friendly than a tour to London or Paris. From the hills of Zakopane to Prague Castle to the bathhouses in Budapest, Eastern Europe holds a substantial offering of society, nature, design, and also background, as well as it's right there waiting to invite its tourists.

List of must-visit tourist places in Eastern Europe below:-

It's not simply the guarantee of one-of-a-kind Slavic languages (that'll get your tongue in a tangle) that makes this a compellingly offbeat area to travel. An Eastern Europe experience awaits for those aiming to check out handsome, historic cities or venture into the remote countryside to fairy tale towns as well as lofty mountain ranges- all without a solitary vampire in sight.

A tour to Eastern Europe is incomplete without the adventures experienced by travelers. Now, Eastern Europe is a popular place for adventures where you get to explore a large number of sports that will nurture a rush in your adrenaline. You can explore the birthplace of Dracula, swim magnificent lakes, check out even more incredible 17th-century churches, and stay among local individuals as part of a walk with 'accursed' hills.