If you are looking forward to some tranquil place that is completely away from the tussle of everyday life, then what could be better than a vacation to Sikkim? Lying in the North-Eastern part of India, it is a hill station that has a wonderful climate ,100% organic food , pristine people and delicious food to tuck in. If you are already developing an urge, then book an exclusive Sikkim Tour Package today, from Swan Tours!

Nestled in the midst of Nepal, Bhutan and Tibet, Sikkim is a part of the seven sisters in NorthEast India ,with Gangtok as its capital, it scores in being one of the most tranquil hill stations across the country with an alluring landscape covered by mountain peaks, glaciers, meadows, and wildflowers. If you are already impressed by the landscape recitation of the place, then why not travel through the best Sikkim Tour Package provided by Swan Tours.

How does Sikkim win hearts of the tourists?

When to travel to Sikkim?

If you want to visit Sikkim for a vacation, then the best time is from the months of March to June or from September to December when the weather conditions work in your favor. Avoiding the travel in monsoons allow you to prevent landslides happening in the place. The beautiful snow fall season starts from the winter month of December and continues to the month of February!

How Will you Travel to Sikkim?

Pakyong Airport is the nearest one to Sikkim where you can land while traveling to Sikkim via flight. Bagdogra airport is also well connected to Sikkim which acts as a useful conveyance from all the major cities. From the terminal, you get connected to the city via road.

If you want to reach Sikkim via train, then commute from the New Jalpaiguri railway station which connects you from all the major towns of India. Further, you can board a car or bus to reach the destination!

National Highway 31A  is the most effectual highway that allows you to reach Sikkim. You can either commute through a bus or use a car to travel to the place, whichever suits your comfort.

What Things can you Explore in Sikkim?

When it comes to catching the Sikkim tour packages that are customizable, then Swan Tours offers you the best deals to spend the vacation with the top-notch facilitation at a friendly budget pertaining to the bookings, accommodation, transferring, eating and activities included throughout the trip.

Q. How cold are winters in Sikkim?

Ans: Winters seem to be the beautiful time to explore Sikkim if you are a snow lover because places like the Kupup Lake, Tsomgo Lake, Yumthang, Zero Point, and Lachen are the spots which witness mandatory snowfalls in a year.

Q. Which are places where one can shop in Sikkim?

Ans: Some of the crucial places to shop in Sikkim are MG road where you get Sikkimese cups, Choksi table designs and Thangkas.

Another market is Lal Bazaar which is popular for the organic and farm products that are fresh and healthy.

Other exclusive markets to purchase the best sweets and dry fruits along with the Dogra jewelry and accessories are the Old and New Markets.

Q. What items must I carry to Sikkim?

Ans: Make sure that you carry the woolen clothes, thermal body inner wears, as your apparel. Other than that carry rain jackets, mandatory medicines, and two copies of your ID which you may require there.

Q. Is Sikkim a safe place for a vacation?

Ans: Sikkim is a completely safe place for a vacation when you can spend quality time without worrying about the crimes for the rates are too less. Although you must make sure that you keep all the safety precautions in your mind as prescribed by your guide.

Q. What are the best local foods to explore in Sikkim?

Ans: Some of the main local dishes that you can find and taste in Sikkim are as follows:

Momos or dumplings consist of the covering of white flour and the filling which is either veg or nonveg.

Gya Thuk or Thukpa is something that is tasty as well as healthy. It is prepared with veggies and noodles; chicken is an addition only for the nonveg eaters.

Phagshapa is a prominent local dish that is made out of the strip of pork fat with radish and dry chilies adding both spicy and tangy flavors to the dish, that is rich in proteins.

Sha Phaley is a wonderful Tibetan dish which is prepared with meat, and break which is deep-fried in oil. It is crispy on the outside and soft inside.

Gundruk is another local dish of Sikkim which has immigrated from Nepal. It is a leafy dish for the vegans that helps maintain the metabolism of the body. 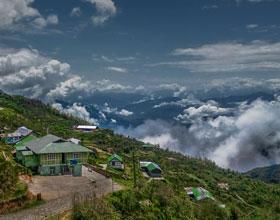 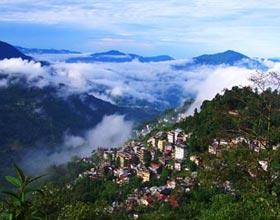