Bhutan is a country that is extremely rich in its cultural presence. From making you familiar with the religious values, it will also preach the cultural significance when tourists are around. Not only is Bhutan a beautiful place to visit on vacation, but its spontaneous history makes it legit as a tourism spot.

From the Buddhist culture to the pristine culture propagated by the people out there, you get to experience the art and architecture that talk about the Bhutanese identity. If you want to make a cultural tour in and around Bhutan, then you can enjoy sightseeing in Paro Rinpung Dzong, Kichu Lhakhang, the oldest temple in the country, and Drugyel Dzong. Other than that, there is the National Memorial Chorten and National Textile Museum, the Folk Heritage Museum and the School of Traditional Painting of Arts and Craft. Set out on a guided tour to the dense forests of Oak and Rhododendron trees where you will be covering the Paro Dzong, Gangtey, Pa Chu, Ta Dzong and so on.

Other than these, there are many festivals that you can count on namely, Thimphu Festival, Jambay Lhakhang Drup Festival, Wangdue Phodrang Festival, Paro Tshechu, and Haa Summer Festival. The pristine culture, authentic rural life, ancient Dzongs and monasteries and the lifestyle that the local people have inculcated. 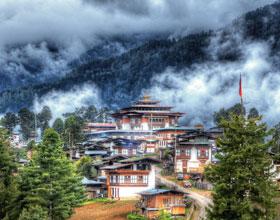