South India is another immensely visited and awe-inspiring extract of the country which amazes its tourists throughout the year on the vacations they decisively plan to hit the sightseeing places. The beautiful sightseeing spots, serene nature, tasty South Indian dishes, and the mystical climatic conditions that stay moderate throughout the year to support tourism. Some of the top places that you can count as the natural wonders in South India are:

Gandikota which is also known as the Grand Canyon is the country that is formed by the Pennar river which also played a huge part in the history of the kingdoms that existed in South India in particular.

Dhanushkodi is another town that has not been discovered or explored yet, the Adam's bridge is taken to be the biggest Tombolo in the world and is also believed to have formed by the intersection of India and Sri Lanka that happened a thousand years ago.

Borra Caves have been formed by the natural forces which are located in the top of the Ananthagiri hills of Andhra Pradesh's Araku Valley which is one of the most ecstatic sights around the country.

Hogenakkal Falls is an impressive location to be in when you are in South India with a peaceful valley that steals your attention being at an elevation of 150 feet surrounded by the large black granite rocks and the river Cauvery.

The Borra Guhalu is another amazing site to explore which is situated in the Ananthgiri hills of the Araku Valley on the East Coast of India and houses a huge number of bats, fruits, gold gecko and insects.

Mudumalai National Park in South India is what links both the Western and Eastern Ghats thus, being the habitat to thousands of animal and plant species making it up to the majority. For more information on South India holiday package contact Swan Tours or call 011 23415601. 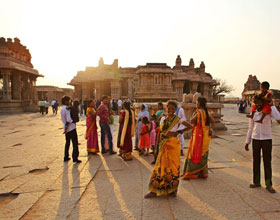