The Spituk Monastery in Leh Ladakh is also known as the Spituk Gompa that is a known Buddhist monastery in the Leh district with the mesmerizing Indus Valley below. It is situated at a distance of 18 km from Leh, Apituk that makes it very famous as a monastery in Northern India. It is known as the Pethup Gompa among the locals that were founded by Od-de in the ancient times of the 11th century.

If you want to pay a visit to the Spituk Gompa in the most convenient manner possible, then make sure that you are driven via a local roadway transport from Leh or Ladakh that will not be more than 8 km in distance. What welcomes you to the monastery is the Gustor festival held at Spituk in the eleventh month of every year in the Tibetan calendar where the mask dance is famous and performed by the monks. Always make sure that you make a visit to this place during the summer to early autumn months of March to September or October so that you need not fight the immense cold and monsoons.

Here is list of tourist places to visit in Ladakh. 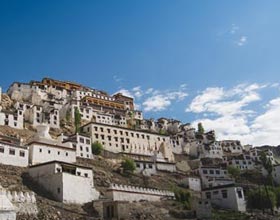