South India is famous for the religious spots that it holds, making it an epicenter for millions of devotees and tourists traveling from all parts of the world to visit and pay homage to the same. Some of the best places that you as a spiritual being will enjoy visiting are mentioned below:

1. Madurai - This is one of the oldest cities in Tamil Nadu which has huge historical insights of the Pandya kings since times immemorial and this place houses a lot of spiritual places like, the Meenakshi Temple, Thirumalai Nayakar Mahal and also the Vaigai Dam to mention a few major places that you can visit during October to March.

2. Tirupati - Tirupati is known to be the most significant factor of Andhra Pradesh which is dedicated to Lord Vishnu which is situated in the Chittoor district and is one of the most popular pilgrimage spots and home to a large number of devotees at quotidian. Other than this, you can count on the Sri Venkateswara Temple, Akasaganga Teertham and Silathoranam which you can pay a visit in the months from September to March.

3. Samalkot - Samalkot is another small town which has the charm for the pilgrimage places it houses namely, Kumararama Bhimeswara Swamy Temple, Thalupulamma Thalli and Kakinada/ Situated in East Godavari district of Andhra Pradesh, Samalkot is dedicated to the shrines of Lord Shiva which can be ideally visited from the winter months of October to March.

4. Guruvayur - Guruvatur in Kerala, is known popularly as the Lord Krishna's own country that is the largest temple housing of Lord Krishna followed by the Punnathurkotta Elephant Palace,  Mammiyoor Shiva Temple, and  Guruvayoor Temple. Visit these place during the winter months of October to February.

5. Kanchipuram - Kanchipuram is known as the house of temples in Tamil Nadu that houses the Kamakshi Amman temple, Vardharaja Perumal temple, and Deverajaswami temple which makes it the Golden city of thousand temples in India and is thus, a very popular location in the SOuth India for the tourists. Choose any time between the month of October to May for a visit.

7. Rameswaram - Rameswaram is one of the holiest places in India that houses the Rameshwaram temple, Dhanushkodi temple and beach along with the adventure of glass boat ride at the Pamban Beach. Explore the beautiful island that you want to explore! For more information on South India tour package contact Swan Tours or call 011 23415601. 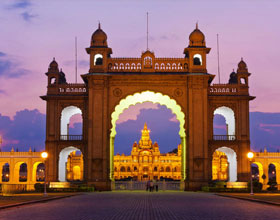