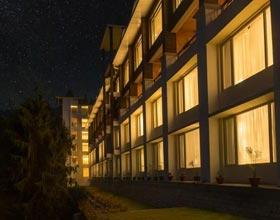 When in Shimla, besides the local sightseeing of Shimla , There are a lot of day excursions that can be done from Shimla , Some of the sightseeing excursions are as follows:

MASHOBRA: (2,149 m) the destination is famous for the most luxurious Oberoi Wildflower Resort, The apple orchards and thick oak and pine forests.

KUFRI: (16 km) Situated at an altitude of 2,622 meters, it is a noted venue for summer and winter sports. A sparkling winter sports festival is held here each year in February.

FAGU: (22 km) Situated at an altitude of 2,509 meters, it is a vantage point with panoramic views of the ranges and valleys. Fagu has a rest house and a tourist bungalow overlooking the Gir Valley.

NALDEIIRA:(23 km) Site for scenic beauty, nine hole golf ground - with its springy turf crown of Deodar it was laid out at the instance of the Viceroy, Lord Curzon.

SOLAN: (48 km) it is located in an agricultural area where a variety of vegetables and mashrooms are grown. Solan has a number or picturesque spots ideal for walks and picnics. Solan is also known for its famous brewery which was set up in 1835. KAROL TIBBA and METEOL are pretty spots while KOTLA NALLAH with its stream, the SAPROON SPRING and the HAPPY VALLEY are delightful locations for rambles. MAREOG, GAURA and KARKANU on the Giri River, all within a 20 km radius are excellent for a spot of angling. BAROG, 5 km from Solan, was an important stop on the railway line in the early part of the century. The hill train halted for an hour here, while the travelers indulged in a lavish lunch. HPTDC runs a Tourist Bungalow at Solan and Hotel Pinewood at Barog.

TATTAPANI: (52 km) a place of hot sulphur springs, it is noted for their invigorating and curative effects.

NARKANDA: (64 km) Situated at an altitude of 2,707 meters, this place is a famous skiing resort. It has a choice of slopes ranging from a beginner run and slalom slop, to sharper descents for the experience skiers.

KASAULI: (73 km) located 1927 m above sea level-forest of pines, oak and the crisp mountain air are incentives for picnics here. Monkey point, the highest point offers a panorama of green hills, the distant plains and the Sutlej river tracing a silvery trail through the scene. SANWAR - 5.6 km is famous for its public school. SABATHO 28 km from Kasauli is situated at an altitude of an 1,437 meters. It has an old Gurkha fort built in the early 19th century.

HATKOI: (104 km) Situated at an altitude of 1,100 meters, this place is noted for its historic temple dedicated to Goddess Durga. About 11 km beyond hatkoi is ROHRU on the Pabbar River, an excellent spot for angling and fishing pools. Enroute to Hatkoi — KOTKHAI is a village located among apple orchards and fine traditional architecture. JUBBAL, once the capital of a princely State has a impressive palace.

RAMPUR: (140 km) Rampur was once the capital of the princely State of Bushair and a major centre on the old trade route into Tibet. The scenic village of Saharan with its fascinating Bhimkali temple is on this road beyond Rampur.

NAHAN: (142 km) a historic town pleasantly located on a ridge of the Shivalik hills, has an outlook ever green forests and valleys with the Churdhat Peak. This little town with a salubrious climate has gardens, temples and three popular walking circuits—the Villa round, Military round and the Hospital round. Nahan's royal affiliation and the remains of old capital, Sirmuri Tal, are to be seen in the sculptures that have been preserved at Circuit House.

RENUKA: 45 km from Nahan has a temple dedicated to the immortal Renuka and her son Parsurama and a tiny wildlife sanctuary. According to the legend, sage Jamadagni, incensed with his wife Renuka for her wrong demeanor, had ordered his son Parsurama to cut off her head. The obedient son obeyed his father and the sage, pleased with his son's compliance, grated him a boon. Parsurama requested his father to use his spiritual powers and restore life to his slain mother and also to ensure her immortality. Around the lake is a wildlife sanctuary, home of a variety of birds, deer, jungle fowl and black peasants. Facilities are available for boating at the lake.

PAONTA SAHIB: (142 km) A town where Guru Gohind Singh wrote a major part of the DassamGranth. The story goes that the place acquired its name after the Guru had lost an ornament known as Paonta worn on the foot and thus came into existence an important place of pilgrimage for the Sikhs. It is said that the Yamuna flows without a ripple here because the guru calmed its turbulent water. There are also temples dedicated to Lord Rama and Lord Krishna.

CHAIL: (170 km) Chail was once the summer resort of the Maharaja of Patiala. Located on a wooded spur, Chail (2150 m) overlooks the Sutlej Valley. The palace of Maharaja built in the late 19th century is now a holiday resort. Chail has fine tennis and squash courts. There are excellent sports along the Gaura River with opportunities for anglers to tangle with Himalayan mahaseer. Chail has also the highest cricket ground in the world — 2250 m. above sea level.

KUFRI: A long and enjoyable drive through lush forests and quaint villages takes one to small but thoroughly popular hill station of Kufri. Its main attractions are the nature park and the exciting trek that leads to the divine Mahasu peak. Several trek routes lead out of Chail up to the Choor peak to Shimla. During winters, skiing is possible at Narkanda. The Giri River at Gaura, 29 km away, is ideal for fishing — buffs.

KINNUR: (200 km) District of Kinnaur, where the icy waters of the Sutlej river and its tributaries have carved deep gorges through the high ranges, the landscape varies from the lush green orchards of picturesque Sangla Valley to the stark magnificence of the Hangrang valley. Kinnur Kailash peak — revered by the Kinnauris as the abode of Lord Shiva is located within massive snow-clad mountain ranges. Kinnur is linked by road to Shimla. Buses, jeeps and taxis are available from Shimla and Rampur.

If traveling during the high season, it is advisable to reserve hotels in Shimla in advance. The luxury hotels and resorts in Shimla include The Wildflower Hall, The Cecil Oberoi, Radisson, and The Chalets Naldehra. For more information contact Swan Tours – one of the leading travel agents in Delhi, India.

Amongst the hill stations in north India, Shimla is the most popular. Shimla is the capital city and the nerve centre of Himachal Pradesh. The city attracts a vast number of tourists every year owing to its moderate climate in the summers and cold snowy weather in the winters, The Himalayan ranges overlooking the city add to its breathtaking beauty.

Shimla is a large city set in the hills and has a number of places of tourist interest. The tourism activity in the state revolves around this city and Shimla is a part of every itinerary in the Himachal tourist circuit. This magnificent city of Shimla has several buildings from the British colonial era, Shimla is well connected by road and rail and has a airport with good connectivity from Chandigarh, Delhi and Mumbai .The most popular choice of travel is whereby guest reaches early morning using the Kalka Mail or a little late by Shatabdi till Kalka and continues the journey on meter gauge toy train till Shimla.

There are more than 100 classified or approved hotels in Shimla and can be categorized as budget, deluxe, luxury and heritage hotels. WoodVille Palace is one of the finest heritage hotels in Shimla to stay during your visit and offers luxurious rooms and suites set in an old colonial splendour. The Oberoi Cecil Shimla, one of the 5 star hotels in Shimla, offers the best in luxury accommodation with a choice of different categories along with great indoor and outdoor activities that could be organized by the activity manager of the resort. Radisson Jass Shimla is one of finest Shimla hotels with excellent modern facilities and great valley views from the hotel premises. Wildflower Hall, Mashobra offers a unique spa experience; the resort is 45 minutes away from Shimla and is the most luxurious hotel in Himachal. If your location choice in Shimla is Mall Road then there is no match to The Clarks Hotel, Shimla which is managed by the Oberoi Hotels and Resorts, offers all modern luxuries, yet maintaining its heritage structure. Swan Tours has been promoting Hotels in Shimla and around for the last 2 decades and has a preferred list of Shimla Hotels available on discounted rates.