Ladakh » 7 Most Famous Monastery in Ladakh

If you ask “What to see in Ladakh”, we would certainly say “What not to see in Ladakh”. One of the highest and also remotest areas on the planet, Ladakh is the residence of Buddhist monks, the seat of monastic culture, the center of monasteries, the haunt of austerity and also the home of peace in the lap of the Himalayas. Besides the beauty of nature, it is the monasteries or Gompas that make the calm landscapes of Ladakh worth several visits for photography, culture & history. Indian recommends a visit to the seven best Ladakh monasteries which have cradled the Buddhist culture and stood timeless for ages.

Here is a list of the most famous monasteries in Ladakh that you should visit:

This is one of the loveliest Buddhist monasteries in Leh Ladakh, managed and run by the Drukpa sect of Buddhism. Hemis monastery in Ladakh takes pride in a magnificent copper sculpture of Buddha as well as stunning paints, Stupas, articles, and fantastic Thangkas showing numerous aspects of Buddhist culture. 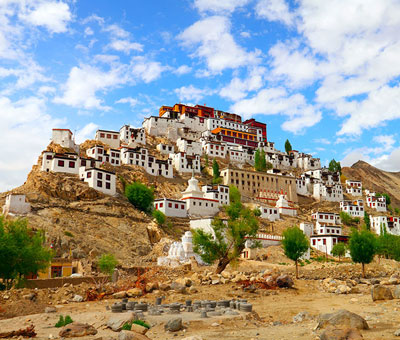 Key attractions of Hemis Monastery: 12m long Thanka- which is largest in Ladakh and also the Hemis Event– celebrated throughout June-July. Dedicated to Lord Padmasambhava, the festival is best known for masked dance performances.

The biggest monastery in central Ladakh, Thiksey carefully watches the town of Leh with its spectacular views. On a cloudy day, you can see the town covered in clouds with a grey hue across the atmosphere. The winds are pure and also it is an enjoyment to linger the monastery while the monks & nuns carry on their daily routines. The homeowners of this monastery in India are exceptionally pleasant. A restaurant near the monastery gateway serves scrumptious food throughout the day; there is a library as well from where you can grab some old books on Buddhism.

The Matho Monastery resides alongside the Indus River and also is originated in the 16th century. The place is extremely renowned for its thangkas, which are nearly 400 years of old, along with the Nagrang festival. It’s an annual festival kept in the first fifty percent of March and shows Buddhist teachings and philosophies.

Besides the Ladakh monastery, travelers are also attracted to the Matho gallery which lies nearby. The museum exhibits a large number of Kashmiri bronze artifacts (which dates back to the 9th century), medieval paintings, as well as modern Chinese paintings.

Stakna Gompa or Stakna monastery is a popular Buddhist monastery among travelers across the worlds. This place shares a distance of 25 kilometers from the major city of Leh. The monastery was preserved by a Bhutanese saint and scholar named Chose Jamyang. He constructed the monastery in the 16th century. This Stakna Gompa stands as a visual display screen of the cultural and religious heritage of Buddhism. One cannot deny the magnificent landscapes offered by Ladakh. The Stakna monastery is situated on a hilltop that resembles the nose of a tiger. At the Stakna monastery houses, 30 monks, as well as the monastery, comes from the Dugpa order. There is a picture of sacred Arya Avalokitesvara at the main position of the holy place. This is among the considerable idols than the other idolizers in the monastery. The literary meaning of words ‘Stakna’ is “the nose of a tiger”.

The portal monastery is the best monastery in Leh and is known for its calm aura and also is a fantastic meditation place. It was founded by Gangsem Sherap Sampo throughout the early 12th century. It is said that around 2,550 years ago popular sages, scholars, as well as translators made use of to visit this place and it still is a favored location by the scholars and also teachers to meditate. One can only reach this monastery by traveling as it is located on the top of a hill like a honeycomb. The region is made up of mud as well as wood. The highlights of this monastery are the stunning sights of the hills, awesome sights of Lugnak Valley, the natural cavern, library as well as the petition room’s houses. The portal monastery is located in Lungnak Valley which is the south of Zanskar and also talking to this monastery can be a surreal experience.

The monastery was built in the 15th century. The assembly hall is the largest part of the monastery. There is a throne, couple of paint, miniature chortens, and sculptures as well as numerous others. In the display screen area of the setting up hall, you can discover ancient masks, thangka, antique arms, and others. As you climb up high, there is a Mahakal temple, which is open only throughout the annual festival that happens in January or February. The monastery has actually lots of yards filled with statuaries and also paints. There is a school inside the monastery, which is closed to vacationers. There is a huge statue of Siren Kali in the monastery. The reflection hall is open to vacationers to execute reflection and also prayers. Trekking is a vital experience task in the regions around the monastery.

Hanle Monastery or Hanle Gompa located in the remote town of Hanle. Hanle Monastery is a 17th century Tibetan Buddhist monastery of the Tibetan Drukpa Kagyu branch of Buddhism. The monastery is perched on a high cliff as well as might be seen from miles away in the valley. There concerning a load’s monks who stay at the monastery.

The valley is home to regarding a thousand people, with about 300 peoples staying in Hanle village. The monastery is home to about 10 monks while an additional 33 or so come consistently for prayers. It is only 19 kilometers or 12 miles from the contested frontier in between India as well as Chinese-controlled Tibet.

Best Places to Visit in Havelock Island & Things to Do