Maldives is one of the great diving centers in the world with all the perfect ingredients: deserted islands, warm and clear waters, thriving coral reefs and an unlimited variety of marine life. Its turquoise lagoons and magnificent coral drop-offs make it an ideal place to begin to appreciate the beauties of this quiet and slow-moving “inner universe”.

The most striking impression is the sheer number and variety of fish, all with beautiful patterns and marvelous colors. There are well over a thousand species of fish, more than half of which are seen regularly on the reefs.

At first the swirling confusion overwhelming, but with careful, you can begin to identify species: the groupers, fusilier butterfly fish, angelfish, surged fish, and puffers. Then there eLe forgettable encounters with sharks, rays and moray eels. 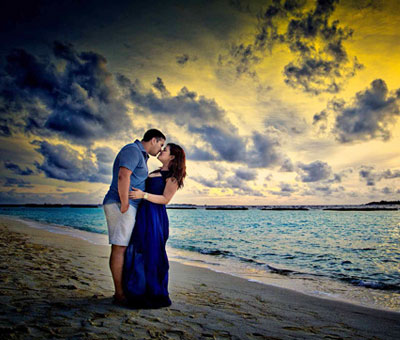 It takes longer to appreciate the different, species of coral, but is equally worth the effort. Maldives is one of the world’s richest coral areas, comparable only with the Philippines and Australia’s Great Barrier Reef.

There are more than 200 different species of hard coral alone, but it is the shapes that they form which make them so amazing: caverns, fans, shafts, canyons and boulders. In the clear, sunlit water they form a kaleidoscope of colour enhanced by myriad fish moving in and out of the nooks and crannies of the reef.

So beautiful is this underwater world that at first it’s difficult to know where to look. Many divers are inclined to drift or flip from patch to patch on the reef, looking for ever more breathtaking shapes and colours. If you want to unravel the reef’s secrets, however, you should remain in one place. Travelling fast over the reef is like flying over the Amazon forest instead of walking through it. The year-round temperature in the waters of Maldives is a constant 20°-30°C (68°-86°F), with the lagoons often reaching 32°C (90°F). The calmest seas and bluest skies are from November to May, when the winds are from the north and the currents outside the atolls run west to east at an average of twenty-four meters (80 feet) a minute.

The roughest seas are experienced during June, and sometimes in October or early November, when strong winds blow and currents run east to west at thirty meters (100 feet) a minute.

The best underwater visibility occurs towards the end of the north-east monsoon, March to April, when forty meters (130 normal. On some occasions it is to see seventy meters (230 feet) N TI the coral edge. But in April, when begins to bloom, the visibility is reduced to about twenty meters (66 feet). Nonetheless, this is possibly the most interesting time on the eastern side of the atolls, for the plankton-rich waters attract manta rays and whale sharks.

Local visibility is also affected by the rise and fall of the tide: incoming tides bring clear water, while the falling tide is filled with plankton and sediments.

To appreciate the full beauty of the corals and fish, bear in mind the effects of water on sunlight. Because of the refraction of light through water, objects seem closer and larger than they really are. Colours also change. As the diver descends deeper, more light is filtered out by water, absorbing different colours at different rates.

Within the first five meters (16 feet) all reds disappear and red coral appears black. Orange appears black within ten meters (32 feet), yellow will be completely absorbed by twenty meters (66 feet) and green by twenty-five metres (82 feet). The last colour to go is blue. It therefore makes sense to take a torch on any dive to bring out the true colours of the marine environment.

Details of most popular top 5 water sports in Maldives are as below: To appreciate this underwater world doesn’t have to be a professional diver. All you need is a silicone mask to keep out the saltwater and improve your vision.

Maldives is an ideal place to learn snorkeling, mask on face, fins on feet and air tube in mouth. By these simple devices you can enter the magical world beneath the surface. It’s like being in a brightly lit aquarium full of the most exotic tropical fish.

First-time snorkelers can discover the sheer delight of floating in warm water, where every move is effortless. To wallow in a shallow lagoon with the sun on your back and the white coral sand below is one of the most euphoric experiences.

To swim for the first time through a channel in the coral reef is breathtaking. The coral edge suddenly drops away to the unknown deep, like suddenly going over an abyss in a dream. But instead of hurtling forever downward you drift and glide like an aircraft. Resist the return to the lagoon; it’s perfectly safe, despite the lurking shadows and sharks deep down by the coral face. With such amazing coral reefs and wide variety of marine life, it’s not surprising that Maldives has become top of the list of the world’s great diving destinations. Most resort islands run well-equipped diving centers with excellent instructors who know their patch in Maldives like the backs of their hands.

The schools offer “resort courses”: three lessons that show what it’s like to dive in tepid, crystal-clear waters off iridescent reefs surrounded by schools of fish.

To obtain a professional qualification like the PADI Open Water Course, which enables the holder to obtain air tanks and dive anywhere in the world, takes about twelve dives, along with a written and practical examination. Any able-bodied person should pass it without too much effort.

The minimum skills necessary to under-take a diving course are:

Because Maldives is as popular as a diving centre, there is no “wilderness diving” near the resort islands. As many as 1,011′ — ten per cent of the tourist popif dive each day and many sites, shared by several resorts, be crowded.

At Banana Reef near Bandos, ple, up to sixty divers a day go du means the thud of boats can sometime,: heard overhead and on some parts of the preef divers suddenly appear like a shoal of sharks.

If a few sting rays are discovered lying in the sand of a little cave, over-eager spectators jostle each other with cameras, disturbing the fish and damaging the coral. It is particularly upsetting for the quiet diver who does not want to impress his friends with his feats but simply wishes to enjoy the privilege of underwater life.

The best way to experience a wilderness dive is to hire a yacht-dhoani and head off with an experienced skipper, keyolhu, to the outer atolls. There, off real desert islands, you will find coral reefs that have remained undisturbed for centuries (See “Diving Guide to Maldives,” Part Two). Diving in Maldivian waters at night with lights is unsurpassed. When the sun sets, corals open up and extend their flower-like tentacles, spiders and shrimps leave their tubular sponges to search for food and moray eels, along with the other nocturnal predators, prowl the deep, dark depths.

But visibility, excellent by day, is reduced to the narrow tunnel of light from your torch — and bumping into shark hunting by moonlight may be unnerving. One of the great attractions of Maldives for divers used to be the shark feeds, first made famous by a German photographer named Herwath Voightmann on Bandos Island. The fashion caught on and soon five locations became popular — the house reef on Bandos, Lion’s Head in the Vaadhoo Channel, Banana Split near Furana, near Nakatchafushi and Fish Hole in Alifu Atoll.

Voightmann dressed up as an under-and fed sharks mouth-to-notorious human “shark” in the archipelago was a lawyer who staged a in the Bahamas after of taking over US$300,000 in Bribes. Interpol at last caught up with him yes, you guessed it, feeding sharks!

The knack is to feed large fish, so when the food is in the shark’s mouth, there’s no room for heads or hands. But tuna sends sharks into a feeding frenzy and it’s preferable to use different fish.

It is still possible to see a shark feed, but the event is becoming rarer for several reasons. Firstly, there is the danger. Secondly, there is the damage done to the sharks themselves: touching a shark can harm its protective body covering, making it prone to infection.

And finally, feeding changes a shark’s natural behavior, not only making it a lazy feeder but training it to associate divers with food.

With the growing ecological awareness among divers in recent years, shark feeding is now discouraged. It is better to observe the underwater world in Maldives as it is without human interference, particularly as it is one of the last underwater “wilder-nesses”. In keeping with this spirit, the Maldivian government officially discourages the so-called “shark circuses”, and Herwath Voightmann has moved on.

The best way to appreciate the underwater world of Maldives is to go slowly, conserving energy and looking around carefully. Nothing compares with a slow drift along a reef edge, the gentle current carrying the buoyant diver along, an honorary fish among fish, a harmless observer of the environment. There is so much un-earthly beauty that afterwards many divers find it difficult to remember the exact de-tails of all they have seen. They just recall a sense of deep contentment and peace.

Humans, of course, are land animals. But if evolutionists are right, all life began in water, so it is no surprise that many feel at home once they have learned basic underwater survival.

Many establish relationships with the fish. Dolphins are famous for offering life-changing experiences, but even moray eels,

With their doleful eyes, impart a certain knowledge and mutual empathy. Dolphins tend to keep to themselves in Maldives, but some diving instructors are emphatic that they have communicated with turtles.

Maldives maintains a maximum diving depth of forty meters (131 feet), but some resorts have introduced their own limit of thirty meters (98 feet). To go deeper, especially in clear, warm water, is a constant temptation. It is fatally easy to succumb to an excess of nitrogen in the blood, which induces the “raptures of the deep”. The overwhelming sense of wellbeing and power leads the most experienced diver to lose all caution and care. In such a happy-go-lucky state, divers have been known to offer the regulator of their air supply to a passing fish. The feeling of elation is soon followed by confusion. Each year, experienced divers and even instructors the world over disappear, drawn ever deeper by the lure of the ocean.

For more information on Water Sports in Maldives and other tourist activities contact Swan Tours, one of the leading Tour Operators in India, promoting tourism in Maldives since 1995. Swan Tours offers discounted rates for all popular hotels and resorts in Maldives.