Varanasi » Top 5 Must Things to do in Varanasi

Top 5 Must do Things in Varanasi

Swan Tours based out of New Delhi India specializes in customized travel in India, The most popular tour offered Swan Tours is Golden Triangle Tour with Varanasi covering Delhi , Jaipur , Agra and Varanasi. Boat rides on the Ganga are an intrinsic part of the Varanasi experience. So is bargaining with the boatman. Expect to pay about Rs 100-200 per person per hour, though rates can increase depending on demand (and particularly at sunrise, when boat rides are most popular). Your hotel may also be able to arrange a ride in advance, though this will probably be more expensive. When in Benaras, be sure to sample its delicious vegetarian snacks and desserts, from one of the many shops lining its narrow lanes. The mouth-watering purl, kachauri and samosa are served hot with spicy chutneys, vegetables and pickles. Benaras’ chaats are delectable, though other UP towns like Kanpur and Allahabad argue for the superiority of their own. For the sweet-tooth, the peda, malpua, balushahi, jalebi, and creamy malai gujiya are a must try. The unique malaiyyu is a favourite during the cold winter months. Varanasi also offers a delectable choice of traditional drinks: colourful sherbets made with fruits, curd-based lassi, thandai spiked with bhang, and panna made with raw mangoes. 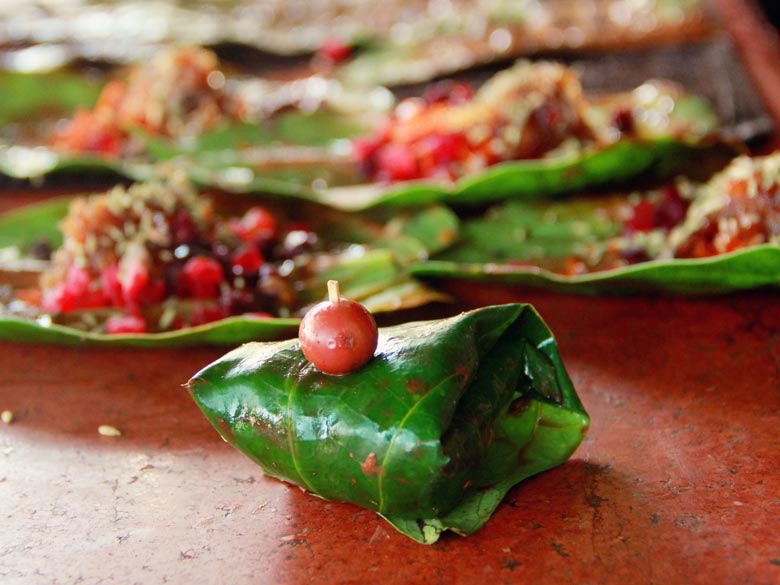 The banarasi paan is an important part of the city’s culture of masti or gay abandon. Its winding lanes are studded with paan shops, and connoisseurs claim they can tell the special blend of each paanwa/a. The most expensive variety is the soft Maghai, and other valued ones are Bangla, Mitha, Kapoori, Banarasi and Mahoba. The legendary silk weaves of Varanasi are sought-after for their unique texture and beautiful weaves. The most celebrated Banarasi weaves are the heavy jamdani brocades woven with gold and silver thread called zari. Once made of pure gold and silver, what is available off-the-rack today use synthetic zari. Tanchoi, an embossed weave that is said to have come from China, is also peculiar to Banaras. Every Indian bride desires to have at least one Benarasi sari in her trousseau. To see the weavers at work one can visit the localities of Alaipura, Madanpura and Lallapura. To watch wholesale trading in saris, one may visit the sattees or dealer markets in Golghar and Kunj Gali. Varanasi is also sacred for the Jains as it is the birthplace of their seventh and twenty-third tirthankara, Suparshvanath and Parshvanath. Varanasi is not only the site of Suparshvanath’s birth but also where he had four of his kalyanaks (auspicious events that occur in the life of a tirthankara).

Shree Parshvanath Digambar Jain Tirth Kshetra in Bhelupur locality is held in high reverence and thronged by devotees all year round. The 7.5 m high idol of Parshvanath enshrined in the sanctum is said to possess miraculous powers, and to fulfill all wishes. The Swetambara Jain Temple close by has a 6 m high image of Parshvanath. A white idol of the tirthankara here is worshiped by the Swetambaras.

Close by, Sarnath is believed to be the birthplace as well as the site of four kalyanaks of the eleventh tirthankara, Shreyansanath. Topped by a slender shikhara, the peach-pink painted Sri Digambar Jain Temple has a striking gateway. The blue idol of Shreyansanath is seen seated in padmasana, while the walls around it are embellished with Jain paintings and scriptures.

The eighth tirthankara, Chandraprabhu is said to have been born in neighboring Chandravati (30 kms from Varanasi). This is also where four of his kalyanaks took place. The Swetambara and Digambara temples here, standing adjacent to each other, draw thousands of pilgrims.

Varanasi Airport is at Babatpur, 22 kms from Vraranasi Railwai Station and 26 Ions from the city centre at Godoulia.

Bus service is often erratic from the airport, and it is best to book a taxi to transfer to the city. It is advisable to ask your hotel to send a car to the airport.

Varanasi Railway Station is in the Cantonment area. Around 16 kms from Varanasi is another important railway station, Mughal Sarai Junction.

Varanasi is situated at the junction of N2, N I-1 H7 and NH29, and is hence well-connected by National Highways to Kolkata and Patna and by State Highways to all maior towns of Uttar Pradesh.

For more information on top 5 must things to do in Varanasi and tourist information on Golden triangle tour packages contact Swan Tours, one of the leading Travel agents in India.

Top 9 Things to do in Mahabalipuram