The Jhansi Fort (4 kms from the railway junction) bears testament to the city’s turbulent history; it was built on a rocky outcrop in a town then known as Balwantnagar (now Jhansi). Today the fort, with well-manicured lawns, impresses one by its sheer size, particularly of its battlements.

The fort has ten gates or darwazas, and the first eight of these retain their original wooden doors. The complex extends to a sprawling 15 acres and measures about 312 m in length and 225 m in width. A breath in the wall between Sainyar and Jhirna gates dates back to the war in 1858, when British soldiers managed to destroy this part of the wall. Apart from these, there are also four smaller entrances or khirkis in the walls.

There is a massive canon called Kadak Bijli Tope near one of the entrances, believed to have been used by Ghulam Gaus Khan, the Chief of Cavalry.

Within the fort complex is Panch Mahal, a five-storey palace where Lakshmibai lived with Raja Gangadhar Rao. Soon after his death, she shifted to Rani Mahal, outside the fort.

Across Ranch Mahal, one sees a signboard that indicates the exact spot where Rani Lakshmibai Is believed to have jumped, astride her horse, to escape the British. One of the many stories surrounding this incident says that the impact of the fall broke the horse’s legs and the Rani had to make it to Gwalior on foot. 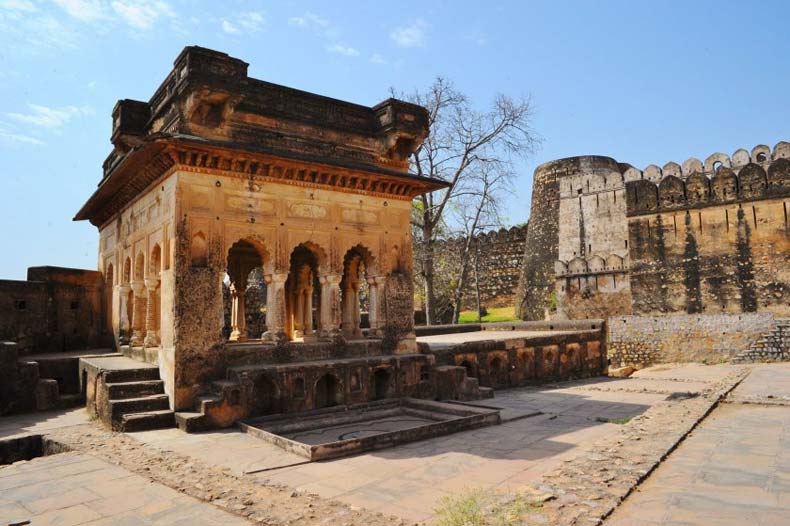 The complex has two well-kept temples, Ganesh Mandir and the Shiv Mandir.

A few minutes from the fort is Rani Mahal. Built during the latter half of the 18th century, Lakshmibai’s palace has a quadrangular courtyard with a small well and two fountains. Paintings of flowers, black bucks, peacocks and other birds can still be seen on the walls of the durbar hall.

Across the palace are skeletal ruins of structures that were once used as stables. The palace and the ruins were taken over by the ASI in 1961.

About 3 kms from the Fort is the Government Museum, a repository of weapons, statues and photographs that belonged to the Chandela dynasty. Photography is permitted in the museum, but with due permission. (Closed on Mondays and second Saturday of every month).

Right opposite the Museum is Lakshmibai Park, with a statue of the queen astride her horse. Close by is Gangadhar Rao ki Chhatri, the cenotaph of her husband built in 1853. The intricate carvings on its 12 pillars and its curved roof are examples of architectural excellence from the 19th century.

St. Jude’s Church, a Catholic church, is known to be the first shrine of St. Jude in all of south Asia. Its foundation was laid on October 29, 1956. During the holy Novena and the feast of the saint in October, the shrine teems with pilgrims.

The Lakshmi Tal on the outskirts of the city is a popular picnic spot. About 24 kms from Jhansi on the Jhansi-Mauranipur road is the small, historic town of Barua Sagar, where a battle between the Peshwa troops and Bundelas was fought in 1944. An old fort built by Rap Udit Singh is picturesquely situated here and commands an excellent view of a large lake and surrounding landscape. There are ruins of two ancient Chandela temples here, the older one known as Ghughua Math, made of granite and consisting of four cells, each with ornamented doorways, three bearing the image of Ganesh and a fourth the figure of Durga. There is an old mound crowned with a tower, called Jarai Ki Math,which houses an image of Shiva and Parvati. The eastern side of the tower is lavishly decorated with hooded balconies.

For more information on top 12 tourist places in Jhansi, contact Swan Tours – One of the leading Travel agents in Delhi, India.