Gujarat is known as the land of festivals. It is popular throughout India as well as the world for its spirit of festivity. Apart from the festival celebrated in the whole nation, there are a host of other festivals distinctively related to the state. These traditional festivals have been celebrated in the area given that time immemorial. Peoples observe these festivals purely as they still comply with their age old custom and traditions. They are proud of their rich heritage and it is visible from the manner they celebrate. Some of the fairs and festivals which are celebrated in Gujarat throughout the year are International Kite Festival, Diwali, Holi, Janmashtami, Kutch Mahotsava, Navratri, Shamlaji Fair, Modhera Dance Festival, Tarnetar Fair, Bhadra Purnima and also Vautha Fair.

Below are the 7 Most Popular festivals of Gujarat which will certainly leave you in high spirits, undoubtedly!

1. Navratri – Tops the listing of most awaited festivals in Gujarat 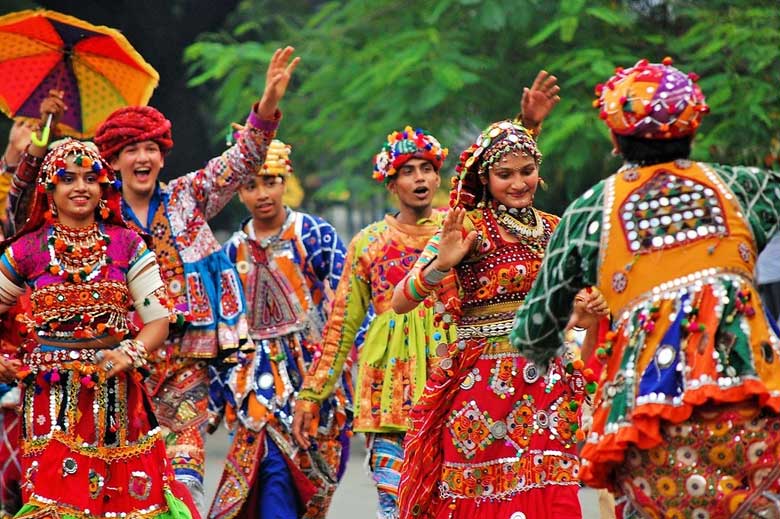 We can’t deny we think of Dandiya, Garba and also Falguni Pathak when we think about Gujarat Navratri Festivals! This is amongst one of the most dynamic festivals in Gujarat as well as other parts of India. During this 10-day celebration, locals perform a Durga pooja, and also take pleasure the music, Garba, as well as Dandiya.

Where: Navratri is a traditional festival of Gujarat. You will certainly encounter the celebration in every space and also corner of the state.

What to expect: A dynamic festival that exhibits the colorful culture of Gujarat with acoustic songs and dance. This is your opportunity to dress in ethnic Gujarati outfit.

When is Navratri celebrated: This festival falls in the month of October Every year.

Also Visit – Where to Go in Gujarat

2. Rann Utsav – As the white desert merges with the lively heritage Rhythmic strums of ravanahatha, Gujarati men with famous mustaches and pagris, as well as the sparkling white sand– the desert of Rann wears a cheery avatar right when fall is at its peak.

Gujarat’s remarkable heritage takes the center at the Kutch celebration of Gujarat. It is that much-awaited time of the year when peoples, regardless of where they live, come for a lavish experience of the most popular festival of Gujarat.

Where: The Rann of Kutch

When is Rann Utsav celebrated: The festival happens in between November and also February every year. What is it: Uttarayan or most commonly known to as the kite flying festival was initially a Festival of Gujarat and is now celebrated all over the country. The sky fills out with colorful kites of all shapes and sizes, and people absorb in fun-filled competitions where the objective is to reduce others’ kites while keeping your very own in the sky for the longest time possible. The festival marks the day when winter season begins to turn into summer. It is a sign for the farmers that the harvest season is on its way and a sign of amusement and joy for others. Ready. Set. Kai Po Che!

Where is it celebrated: Throughout Gujarat

When is it celebrated: 6-January – 14th January What is it: Devotees in large numbers arrive at the Shamlaji fair on foot or camel carts, singing devotional songs? People dancing and lugging banners birthing sacred icons are a common sight which sets in a cheerful mood. They prayer the deity as well as shower in the divine waters of the Meshwo river. The reasonable, together with being a happy area, occurs to be a market for trading flatware, cloth, as well as ornaments.

Where is it celebrated: Shamlaji Temple (positioned near the Gujarat-Rajasthan border).

When is it celebrated: The celebration lasts for about 3 weeks, around November. Kartik Purnima (Full moon night) is one of the most essential day for the fair.

Mela is an amazing animal trade festival of Gujarat. Unusual as it may sound, but this is where you’ll see several camels and also donkeys decked up with ornaments and paints. This isn’t just a reasonable; individuals also consider this occasion a lot more pious than Diwali, as the location occurs to be where seven holy rivers converge.

Many families leave their home for few days to reside in tents near the fair venue. Day-to-day a various wonderful dish is made; khichu is specifically preferred. The river is lit by floating diyas at night as well as one can take pleasure in shopping in neighborhood stalls all through the mela.

What to expect: Beautifully decorated animals, stalls selling whatever from handicrafts to equipment, Hindu traditions being carried out on river bank, tents and also delicious local cuisines.

When is Vautha Mela celebrated: This five-day festival drops on the full moon evening of Kartik month of Hindu schedule (November). What is it: The Rath Yatra entourage passes through various parts of the city. The devotees pull 3 small chariots with the idolizers of Lord Krishna, his brother Lord Balarama, and also their sister Subhadra throughout the city. Enthusiasts, in thousands, take to the streets on that holy day to worship the deities.

Where is it celebrated: Although the yatra is held in numerous cities and also towns in Gujarat, one of the most popular among all is the Ahmedabad Rath Yatra.

Mahadev Fair is a five-day festival devoted to Lord Shiva, and also it is believed he himself go to the area during this time. The sages riding on elephants blow shells and lead processions, noting the start of this fair. Dance, music, petitions and also offerings are executed during this enlivening celebration. People before pertaining to the shrine do parikrama around the Girnar Hillside.

When is Bhavnath Mahadev Fair celebrated: The fair is arranged in February or March, throughout Maha Shivratri.